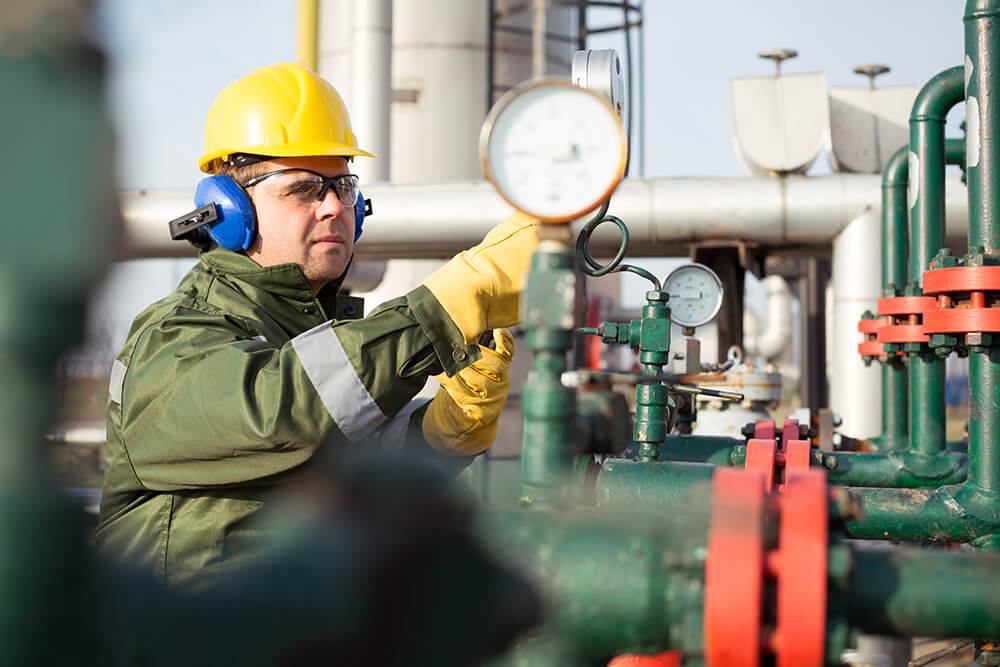 Why do I have to bump test my gas detectors?

This is a common response that many manufacturers and industry associations hear when they recommend “bump” testing gas detectors prior to each day’s use.

In the past, the reasons for this may have been hard to understand. Without quantifiable evidence, the importance of bump testing was often lost in a deluge of other safety best practices and recommendations. A few years ago, misleading information about so-called “maintenance-free” gas detectors only added to the confusion.

Over the past seven years, we have collected and monitored data from tens of thousands of gas detectors. A recent analysis of this data has produced some surprising results. Now, we have hard evidence that supports the need for routine bump testing.

In this paper, we will explore these findings and demonstrate the life-saving importance of bump testing prior to each day’s use.

A “bump” test of a portable gas detector is performed in order to verify the functionality of sensor(s) and alarms. The test is performed by briefly exposing the instrument to a known concentration(s) of the target gas(es) and verifying that the instrument responds accordingly.

The bump test is only a verification of functionality. It is not designed nor intended to measure a gas detector’s accuracy. Therefore, the concentration of gas used in the exposure is not critical; but it should be higher than the alarm settings for each sensor.

This is necessary considering that the output of a typical gas sensor in clean air is zero. That’s the same as the output of a non- functional or dead sensor. So exposing the instrument and sensors to gas is the only way to know that the sensor will respond to dangerous gas in the atmosphere.

In the pre-con ned-space era of gas detection, portable gas detectors were characterised by analog meter movements, LED indicators, and in some cases, crude digital displays tied to analog electronic systems. Instruments were used primarily for declassifying areas in hot work operations; or for detecting dangerous levels of methane or oxygen depletion in mining applications. These instruments were considered to be more analytical in nature and more precise than their technology permitted. Therefore, many manufacturers recommended calibration prior to each day’s use to ensure functionality and accuracy.

These instruments were considered to be more analytical in nature and more precise than their technology permitted. Therefore, many manufacturers recommended calibration prior to each day’s use to ensure functionality and accuracy.

Then con ned space legislation went into effect in the United States in 1993 and later in the UK in 1997. As a result, the use of portable gas detection instruments proliferated worldwide. With widespread use in virtually every industrial environment, performing calibration prior to use on large fleets of gas detectors became onerous and economically burdensome.

The legislation required instruments to be calibrated according to manufacturer’s recommendations. This led to end user requests for manufacturers to reduce these requirements and ease their customers’ pain. This gave birth to the bump test as a way to ensure that instruments were tested prior to use while reducing the recommendations for calibration; saving customers time and money.

Today, the term “bump test” is part of the regular vocabulary of every manufacturer and end user of portable gas detectors.

Analysing this data has revealed that the incidence of bump test failure in instruments tested on a daily basis is approximately 0.3%. That failure rate appears to be trivial. But in practical terms, it means that 3 gas detectors out of every 1,000 will fail to respond properly to gas during a bump test on any given day. The plot below shows that increasing the bump test interval to 20 days doubles the expected failure rate.

A further study combined this test data with an analysis of how frequently gas detectors are exposed to hazardous, alarming conditions. The study found that, on average, one out of every 100 gas detectors not bump tested before use will fail to respond and alarm properly to an actual gas alarm event every 25 days.

Why do bump test and instrument failures occur? Does the frequency of failure refiect poorly on the quality
and reliability of the product? Most often, failure is not attributed to the gas detector or the gas sensors themselves. Failure is created in the environments that the instruments are used in and the manner in which they are used.

Portable gas detectors are used in harsh applications. They are dropped from high places and subjected to extreme shock. They are exposed to extreme temperatures and humidity, and to dust, water and mud.

Delicate sensors and electronics can be damaged by shock. Sensor membranes and openings can also be blocked by debris preventing gas in the atmosphere from reaching the sensors.

The damage to the instrument in these cases is not always visible and may only be apparent when a bump test failure occurs. 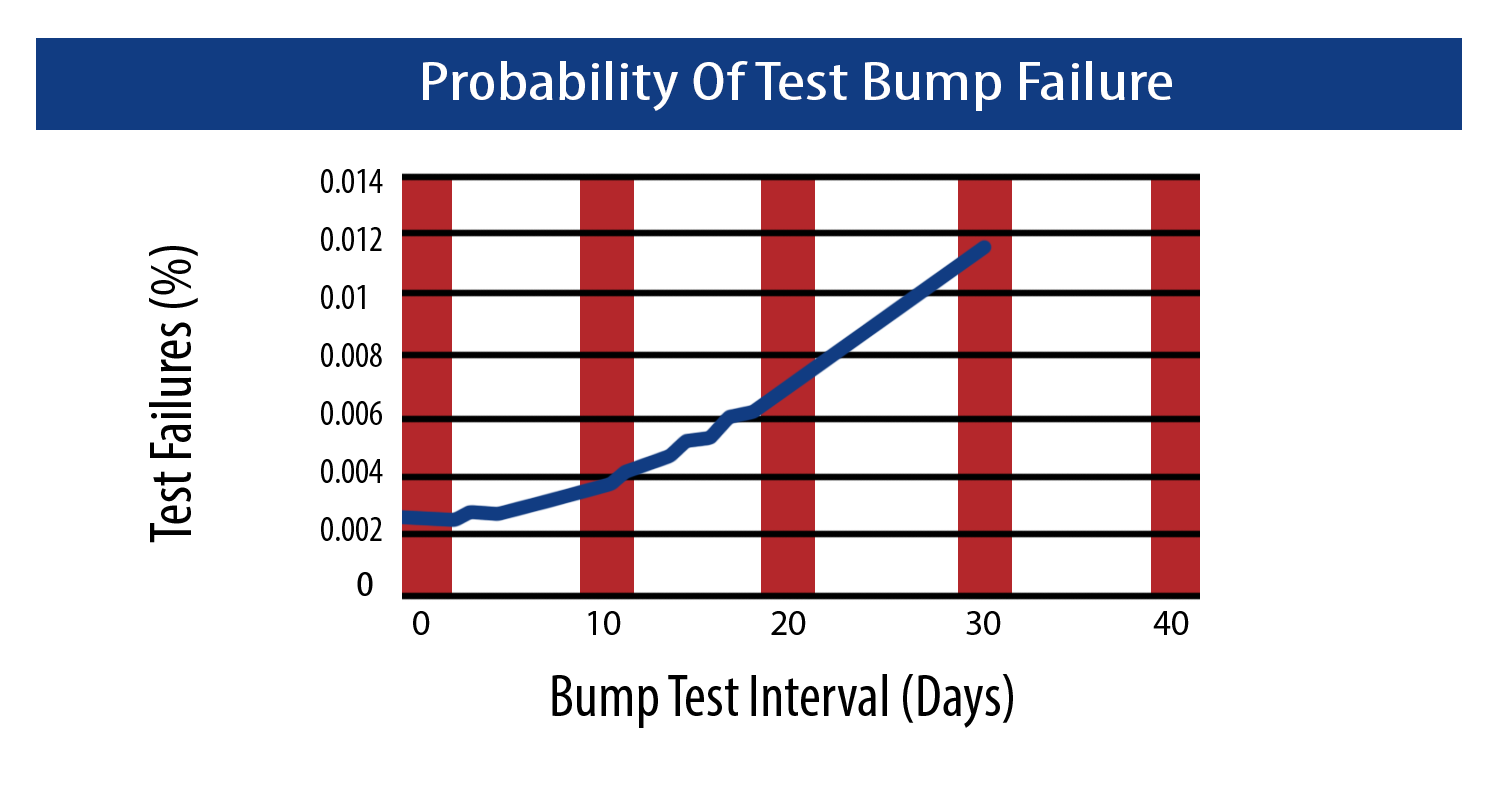 New data supports manufacturers’ recommendations for a daily bump test. This graph shows that the bump test failure rate in instruments tested on a daily basis is approximately 0.3%. Increasing the bump test interval to 20 days doubles the expected rate of failure.

Why Bump Tests are Important

Failure can also be attributed to improper maintenance as demonstrated in the following documented incident: Workers in a refinery control room noticed the smell of gas during a routine shift. They contacted their plant safety department, which sent a portable gas detector to test the atmosphere. After several minutes, the instrument showed that no gas was present.

With the oder from the gas strengthening, the workers decided to evacuate the control room. As they left the area, one of the workers ignited a blast that catastrophically damaged the control center. Luckily, there were no fatal injuries.

Portable gas detectors are precise electronic devices that play a critical role in protecting workers. Their ability to do their job properly is not always visually apparent.On any given day 1 in every 2,500 untested instruments will fail to respond to a dangerous concentration of gas. The daily bump test is the only way to detec

t these failures before they occur. Don’t take your gas detector to the job and rely on it to save your life without testing it first.

Many organisations find it difficult to bump test gas detectors this frequently. They may also want these tests performed consistently and without operator error.

Calibration stations and docking systems have made these challenges easy to overcome. They also save the time that it would take for an operator to perform the same function manually. 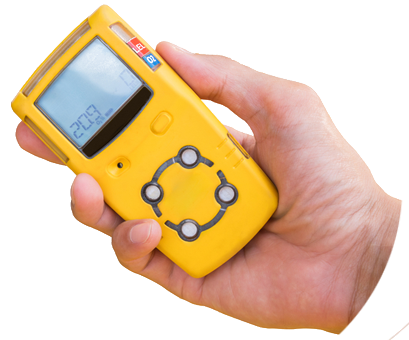 Another option that has gained momentum in recent years provides Gas Detection as a Service. Industrial Scientific’s iNet is the only choice that combines these automated functions with automatic equipment replacements. Plus, subscribers have full visibility into their gas detection program. Hosted software shows trends and data related to their gas detector alarms, exposure and usage. That way, safety

managers have the tools they need to address problems before they happen.

Find out which solution is the best t for you. Contact Industrial Scientific for a free evaluation of your gas detection program. 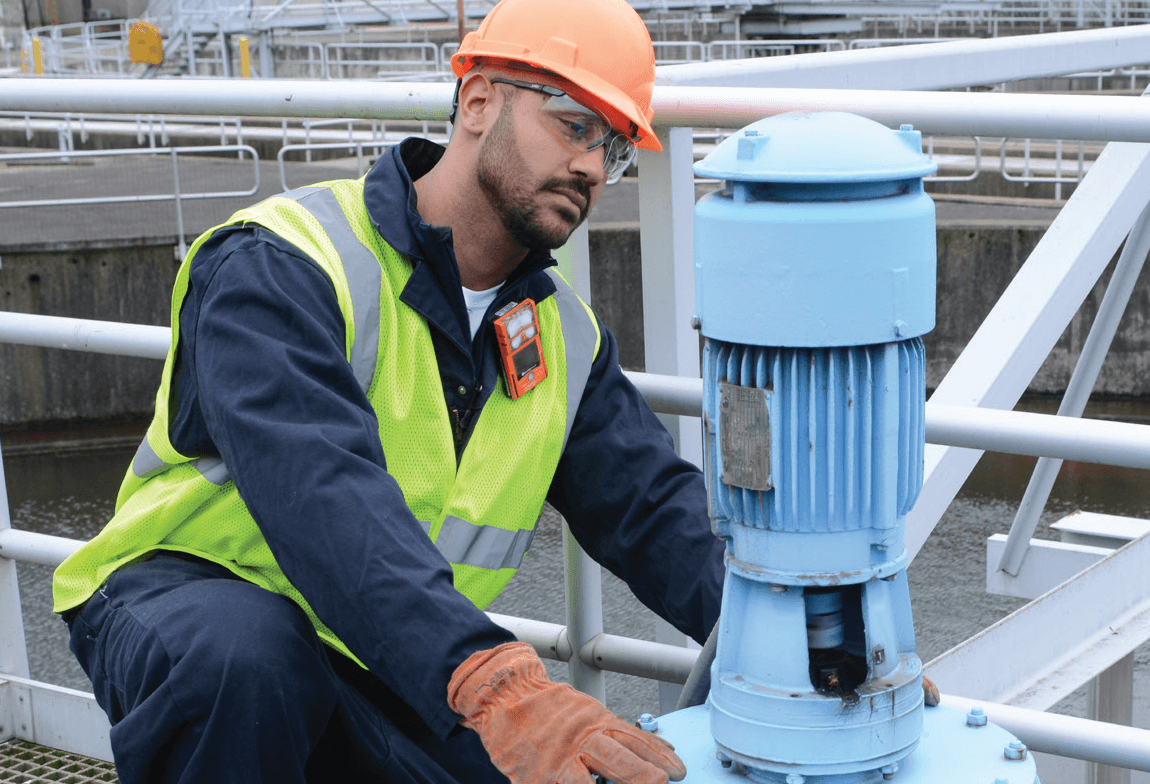 Taking the Guesswork Out of Gas Detection